Wise Roads, as the name implies, is a project aimed at improving the efficiency of transportation associated with the oil and gas industry. Oil producers and the service companies that support them depend on the use of county and township gravel roads to move commodities and deliver supplies to and from well pads, tank batteries, disposal wells and other industry facilities. However, when inclement weather strikes, local governments impose road restrictions that effectively prohibit the movement of truck traffic until road conditions improve. Restrictions are necessary to protect the integrity of roads and the safety of the traveling public, but industry truckers justifiably complained that at times restrictions were imposed more broadly than necessary.

To address this problem and provide additional, detailed, accurate weather information to county road managers, WDEA (Western Dakota Energy Association) developed Wise Roads in partnership with the North Dakota Agricultural Weather Network (NDAWN) at NDSU. The project will ultimately deploy up to 50 research-grade weather stations throughout the oil-producing counties. Initial siting emphasis focused on the top four producers – Dunn, McKenzie, Mountrail and Williams counties – but stations have also been installed in counties around the periphery of the Bakken core. The goal of Wise Roads is to provide real-time weather information, especially precipitation data, to allow county/township road managers to more precisely identify those roads that require temporary restrictions, and more importantly, exclude those that do not.

Before the project began, weather data was sparse across the Bakken. NDAWN had just eight weather stations in the region. The stations closest to the core of the oil activity were near Ross, Watford City, Dunn Center, Hofflund and Plaza. There were gaps of 40 to 60 miles between some of these sites. There was just one weather station in Dunn and McKenzie Counties, two in Mountrail County and four in Williams County. There are now 10 more stations in McKenzie County, and a total of 17 more stations in the other three counties. Other new stations have been installed in Billings, Bowman and Burke Counties.

Full-service Wise Roads weather stations are equipped with a high-resolution camera, and are capable of measuring temperature, wind speed and direction, humidity, and soil temperature and moisture. With the completion of Phase III of installing Wise Roads weather stations in western North Dakota, the region is effectively saturated in terms of covering temperature and wind speed and direction. However, there is still a benefit to collect rainfall data at a higher spatial density, and that is the focus of Phase IV of the installation work. Rain cores of thunderstorms are often only a couple miles wide, and even in widespread rain events, often there are embedded cores of heavier precipitation a few miles across. These rainfall events are easily missed with a 10-to-15 mile spacing.

The 15 Phase IV weather stations will aim to fill in the gaps for rain data, but will be less expensive to install because they will not have thermometers or anemometers. The Phase IV sites will have precipitation gauges and cameras only. Because they don’t measure wind or temperature, the stations can be placed closer to structures. Most will be placed on existing well pads which will allow connection to AC power. The firm power supply allows installation of a heated rain gauge which can be used to melt and measure snow, sleet and other forms of winter precipitation. There are currently only three other NDAWN stations in northwestern North Dakota capable of measuring winter precipitation.

One other aspect of Wise Roads research is geared toward improving “frost law” policy, the period every spring when weight restrictions are imposed on roads to prevent damage as frost and moisture move out of the roadbed. The project will install soil moisture and temperature probes in the bed of gravel roads in the major oil-producing counties. Data will be collected by WDEA's partner in the project, the Upper Great Plains Transportation Institute (UGPTI), which will use data from the roadbed sensors to better determine when frost or load restrictions need to be placed on roads and when those restrictions can be lifted. The probes will be installed at varying depths on the edge of the road, and compared with data on state highways and probes in ground adjacent to the weather station. Temperature profiles from the roadbed and soil in the gravel roads will be compared to determine if other existing soil temperature sensors in the region and state can be used to estimate road subsurface temperature.

Full-service weather stations cost about $12,000 each, and are being funded by a surcharge on the fees generated through WDEA's LoadPass Permits system for oversize trucks. The Oil & Gas Research Council has supported the project with a matching grant of up to $250,000 for the weather stations, and an additional $60,000 to support a meteorologist who manages the project. 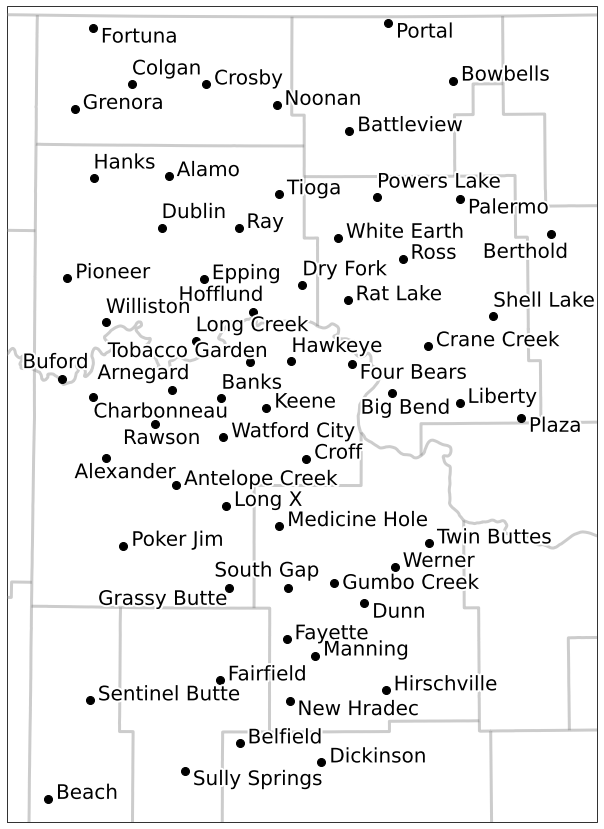 Data is available at the following stations: